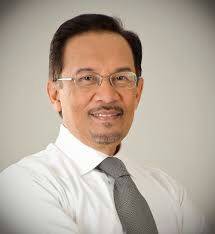 Is Anwar really our future PM ?

The following article is a C & P from a whatsapp that I had just received this morning. I hope my blog’s followers will find this article not only interesting to read but more importantly is as a mind opener. When anyone seeks for our help we do help him by all means but do not allow him to take us for granted after then.

Do enjoy your reading fully !

This is going around on Messenger and WhatsApp ….. If I am a voter there, I certainly know what to do.

First it was ‘Permatang Pauh Move’.
Then it was ‘Kajang Move’.
Now its ‘Port Dickson Move’.
What a mockery – totally preposterous!
We have to teach this family a lesson.
We must make them realise that Malaysia doesn’t belong to them.

This family should not take the rakyat for granted – the voters are not fools!
It was with the relentless effort of the rakyat that the kleptocratic government of BN was removed after 61 years.
This man has no patience. It was the one & only reason he was removed by Dr M in the late 90’s – the rest are story & history.
Fair enough – why can’t his wife Wan Azizah or his daughter Nurul Izzah make way for him?

Isn’t this an act of selfishness?
Why this particular family wants to dominate the party & the parliament?
It was widely felt that if at all there was an urgency for Anwar to become an MP, no other MP should be made a sacrificial lamb, paving the way for his re-entry to the parliament.

Port Dickson MP Danyal Balagopal Abdullah, who is a first time parliamentarian, has been forced to vacate his seat.

At a time when our country is facing an unprecedented financial crisis, is there a need to spend few more millions for a forced by-election?

It is a gross injustice & an utter mockery to Malaysian politics – especially so when 2 of Anwar’s family members are there as MPs.

Wise thinking Malaysians should not allow this dominance of party & government by a single family.

If we let Anwar win in Port Dickson, very soon we’ll have a scenario whereby the husband is the PM & the wife, Deputy PM.
Isn’t that a mockery?

If this scenario were to be staged by the Anwar family, then we can safely presume that PH will not last beyond 2023.

NOW, WHAT MUST WE DO!

Let us all join hands and ensure that Anwar loses in this by-election.

With a little bit of effort we can ensure that the opposition wins.

Losing just one seat will not make a difference for the ruling government.
Nevertheless the rakyat has to remind these unscrupulous politicians that they are not suppose to be taken for granted.
The National Patriots Association(Patriot) – a strong supporter of PH – has already raised an alarm against this Port Dickson move.